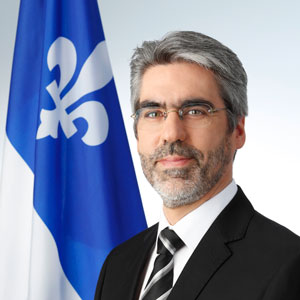 On March 14, 2011, Alain Houde took up his duties as Québec’s Delegate in Los Angeles. Nominated by Premier of Québec, he represents Québec in 13 western US states, including California, Arizona, Washington and New Mexico.

A graduate of Montreal’s HEC School of Business (École des Hautes Études Commerciales), Mr. Houde has dedicated himself to Québec’s economic development since 1986. Upon joining the Government of Québec in 1993, he held a variety of decision making positions within the Department of Economic Development, Innovation and Export Trade (MDEIE) and the Department of Agriculture, Fisheries and Food (MAPAQ). In particular, he headed the MDEIE’s Asia-Pacific, Africa and Middle East division, in addition to the investment promotion division and the Montreal division. He also headed the MAPAQ’s market development and export division. In this regard, Mr. Houde has contributed directly to developing, updating and implementing business and economic development strategies for Québec. He developed knowledge and expertise in the area of innovation, investment and international affairs that is sure to be of great benefit to the clients and partners of Québec Government Office in Los Angeles today.