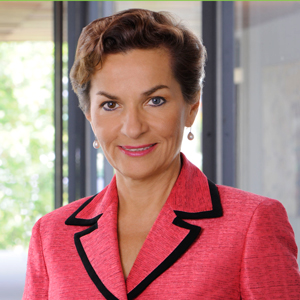 Christiana Figueres was appointed Executive Secretary of the United Nations Framework Convention on Climate Change (UNFCCC) by UN Secretary-General Ban Ki-moon on 17 May 2010.

Ms. Figueres has been involved in climate change negotiations since 1995. She was a member of the Costa Rican negotiating team and represented Latin America and the Caribbean on the Executive Board of the Clean Development Mechanism in 2007, before being elected Vice President of the Bureau of the Conference of the Parties 2008-2009.

In 1995 she founded the Centre for Sustainable Development of the Americas (CSDA), a non-profit think tank for climate change policy and capacity-building which she directed until 2003. From 1994-1996, she served as Director of the Technical Secretariat, Renewable Energy in the Americas (REIA).

Ms. Figueres began her life of public service as Minister Counsellor at the Embassy of Costa Rica in Bonn, Germany in 1982. She served as Director of International Cooperation in the Ministry of Planning in Costa Rica (1987-1988), and was then named Chief of Staff to the Minister of Agriculture (1988-90).

Ms. Figueres has served on several boards of non-governmental organizations involved in climate change issues, including the Voluntary Carbon Standard. She is also a widely published author on the design of climate solutions, and has been a frequent adviser to the private sector on how to play a leadership role in mitigation.

Ms. Figueres holds a Masters Degree in Anthropology from the London School of Economics, and a certificate in Organizational Development from Georgetown University. She was born in San José, Costa Rica in 1956 and is married with two children.