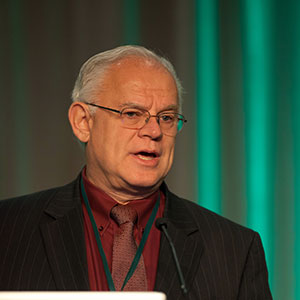 Larry has made climate change a top Federation priority. Larry wrote a book on global warming and wildlife, released by Fulcrum Publishing in September 2009, Last Chance: Preserving Life on Earth, which was awarded First Prize for Non-Fiction by the Next Generation Indie Book Awards in 2011 and can be found at http://www.nwf.org/lastchance.

Prior to joining NWF, Larry served for eight years as President and CEO of the Western Pennsylvania Conservancy where he pioneered watershed restoration and promoted ecological research, land conservation and community outreach. Previous to that, Larry was the Executive Secretary of the Joint House/Senate Conservation Committee for the Pennsylvania General Assembly, Senior Vice President for Conservation Programs at National Wildlife Federation, and 1st Vice President of the Chesapeake Bay Foundation.

Larry is an active community leader, having served on more than 40 governing boards, commissions and committees. He currently serves on the Boards of Directors of The Climate Reality Project; The Climate Reality Action Fund; the H. John Heinz III Center for Science, Economics and the Environment; BlueGreen Alliance; and National Wildlife Federation Action Fund.

In 2011 Larry was awarded the Citizens for Pennsylvania’s Future Visionary Award for his leadership in raising awareness about the critical impacts of climate change throughout the world and commitment to employing clean energy solutions. He was selected as Pennsylvania’s Environmental Professional of the Year in 2002, Pittsburgher of the Year in 2000, and he received a Conservation Service Award from the Christian Environmental Association in September 1995. Larry is married to Clara Schweiger and has three adult daughters, two sons-in-law, and five grandsons.